As per usual I have a ton of updates, and what seems to be very little time in which to write it all down.  Therefore, at a breakneck pace, and with a casual disregard for grammer and spulling.. here we go: For the record, OSM = OpenStreetMap - read about it on the first draft version of our MapQuest Guide to OpenStreetMap.

Since last I blogged, we've added Oceania and India to the routing database - so you should be able to get directions in those areas. The directions data on the Open sites and on the developer web service now updates daily! (Hurrah!).   That seemed very short to write, and doesn't quite convey the monumental effort involved in getting the daily updates working and stable.  If you are not yet familiar with the OSM-powered directions service, it can be found at http://open.mapquestapi.com/directions.
[caption id="attachment_656" align="alignright" width="270" caption="multi-point route across India"]

Nominatim is the main search web service used by OSM and developed by Brian Quinion.  Since pretty much anyone who wants to search OSM uses Nominatim, and the copy hosted on the OSM website needs to have usage limits, we thought it would be helpful to stand up a copy too, to share some of the load.  There are no usage limits at this time.  There is no need for keys or registration, and works exactly the same way as the one on OSM (because the point is that it IS the same as the one on OSM! Open Source FTW!) The Nominatim service can be found at http://open.mapquestapi.com/nominatim. It works just like any other web service - querystring parameters go in, and results come out in JSON or XML. If you don't specify a format, you actually get a rather handy little search interface using openLayers.  Also, like the other web services we host, going to the base URL displays the documentation - so if ever you get lost figuring out how to use it, just back up the address until documentation appears.

We are now hosting a copy of Potlatch 2, the new (still very beta) OSM Map Editor tool as well.  The tool itself can be found at http://open.mapquestapi.com/dataedit/.  We've created a primer to give some basic help, found here on our Developer Network. Potlatch 2 is the new version of the flash-based map editing tool on OSM.  Anyone who is familiar with OSM and with editing the map, is probably familiar with Potlatch - it's what comes up when you click the edit button above the map on OSM, and then lets you draw or move roads, add points of interest, and generally add to, or edit, the map itself.  As a side note (because I find it fascinating) Richard Fairhurst, the creator, called it Potlatch after the indian gift-giving ceremony. The new one has been (and still is) in development for quite some time, but is starting to get close to "prime time."  It was featured last week on the Project Of the Week and caused much great feedback that the developers are applying, even as we speak. It is important to understand that this editing tool is still very much under development, but it IS functional and usable.  It will be upgraded, enhanced, fleshed out, and have increasing documentation as we, and the community, contribute to its growth. Once again, its a completely open source tool, released under my absolutely favourite license.  No I'm not telling, go find it.  Anyone can contribute to its growth, or install it themselves on their own sites. For those who are new, and have never edited before, I feel I should ask for patience when it comes to signing up, and getting the editor registered.  Don't panic, here's a quick cheat sheet of what's going on: 1) In order to edit, you need to have an OSM account.  You can create one ahead of time by going here: https://www.openstreetmap.org/user/new. 2) When you create that account, it will send you an email, that you must then confirm by clicking on the link in the email they will send to you.  When you confirm, it will open a page of account settings.  Don't worry - you don't have to do anything here (although its really cool if you do). 3) When you sign into the Potlatch 2 editor for the first time, its going to give you a link that sends you back to the OSM website again - Log in on the OSM site with the name/password you just created, and OSM will ask you to confirm that you are OK with Potlatch 2 being able to do things for you.  Once you confirm that, you should be good to go. 4) Congratulations! you are now part of the OSM community, and empowered to edit the map! I highly recommend reading the primer, and also checking out the map features page on the OSM Wiki.

In 2007 the free US government map data (AKA TIGER) was imported into OSM.  Unfortunately that was a large amount of data, and a lot of it is inaccurate. Basically this map shows how much of the US map is unchanged from that original TIGER import in 2007 in red, and how much of the map has been touched by someone, since, in green.  Our goal, as members of the OSM community, is to turn all the red roads into green roads. You can read more about the project here.  You can go here to see the TIGER Edited Map Viewer A big thanks to Matt Amos who originally built this TIGER tool and has helped us reinstate it. 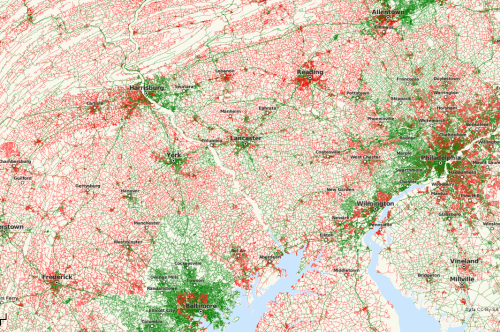 If you use the Potlatch 2 editor, you can also turn the TIGER Edited Map on as a background layer to help you know which roads need attention.  There's a few very simple things anyone can do to help clean up the map in their neighbourhood!
Well that's all I've got for now.  Thanks to everyone involved in getting these things together and out, including Brian Quinion, Andy Allan, Matt Amos, Casey Doerschuk, Greg Knisely, Caryn Hughes, Artem Pavlenko, Bob Rudi, Joe Barbara, Hurricane Coast, Thea Clay, Kumiko Yamazaki, Duane Gearhart, Richard Fairhurst, Cameron Thomas, Tom Hughes, Jessica Feaster, Richard Weait, and Dave Stubbs amongst others.  As usual when I mention names, beat me up if I forgot yours, and I'll buy you a frosty beverage as recompense.