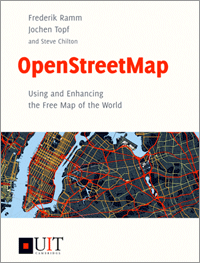 OpenStreetMap: Using and Enhancing the Free Map of the World by Frederik Ramm, Jochen Topf, Steve Chilton Originally published in German, OpenStreetMap: Using and Enhancing the Free Map of the World was first made available in English in September 2010. This book provides a comprehensive overview of OpenStreetMap (OSM) and has become a valuable reference for many mappers. The first half of the book proves to be an excellent source for users who wish to learn about the OSM project, collect data using a GPS, and edit and tag data. You'll find bits and pieces of similar information on the OSM Wiki but if you're looking for a more complete and fluid version, this is it. Everything is explained thoroughly and followed by examples and screenshots. In the second half, the book takes a break from editing and contributing to OSM and instead allows you take advantage of all the hard work that you and everyone else has put in. Users will learn about customizing and publishing their maps through Mapnik, Osmarender, Kosmos, and even uploading your OSM map to a mobile or navigation device. Also included is the section titled "Hacking OpenStreetMap" with over 60 pages devoted to learning about the OSM database server and its API. This will aid you in writing your own OSM software, using Osmosis to filter the data, and when you're ready for it, setting up your own OSM server! This book is the perfect gift for map lovers, GPS addicts, cartographers, GIS professionals, developers, etc, and should be added to their library collection this holiday season. MapQuest was fortunate enough to have a moment with one of the authors, Frederik Ramm, and have him speak with us about OpenStreetMap: Using and Enhancing the Free Map of the World.

Can you tell us a little about your OpenStreetMap background? How did you first hear about the project and what caused you to become so obsessed? OSM is an obsession, correct? I'd certainly say it is an obsession - albeit often an obsession with the negative! You become obsessed with data that isn't (yet) there, with software that nobody has (yet) written, or with bugs that haven't been fixed. You start helping out a little, and before you know it you're "the guy who edits this area", or "the maintainer of that editor". That's indeed how I got started with OSM - Jochen told me he was getting involved in that great project but how the Java editor was causing him pain, and so I thought I'd have a look if I can fix it... The book, OpenStreetMap: Using and Enhancing the Free Map of the World, seems to encompass a little bit of everything. Is it safe to say that both beginners and advanced users of OSM will find value in it? You bet. The book has four major sections - the first one is basically the "management overview" about OSM, stuff you can read without getting your hands dirty and nice pictures you can look at. The next section then is about contributing to OSM - about mapping and editors, from simple map features to the most complicated multipolygon relation. Then we have a section about mapmaking which is already a more advanced topic, and we top it off with a section on hacking that covers technical details down to the last API call. I should be surprised if there's anyone in OSM who does *not* find anything new in the book. Being but one of three authors, I certainly did! What were some of the challenges faced when translating this book from German to English? It was difficult to find a publisher who would produce the book in the way we wanted it to. Jochen and I are book lovers. (Jochen can hardly visit any book store without carrying away a stack of books!) We thought that we had a brilliant book and we wanted it to look brilliant, too. We wanted it printed on the right stock, we wanted the same glossy color pages in the middle that we had for the German edition... that was certainly something that made things more difficult. Once that was settled though, the actual translation was straightforward - even though I sometimes think that writing a new book would have been easier. We had to re-do all the screen shots and many illustrations of course, and our co-author Steve Chilton from England did a great job at helping us to identify situations where our German OSM background had led us to make assumptions that were not universally true, or where we had chosen examples that someone in the US or the UK might not be familiar with. After the whole thing had undergone cross-checking by a few other helpful OSMers and the obligatory proof-reading at the publisher's, I felt we had so many improvements over the German edition that I started to translate some of them back for the next German re-print! Edits and editing tools are constantly being contributed to OSM. How are you able to keep up? Will there be another edition of the book, and is it already being worked on? We have a book web site (www.openstreetmap.info) where we inform readers about anything major they should be aware of. The German book is now in its third edition, with roughly one new edition being published every year. We can't yet say if it will be the same for the English version but if the community likes our book as much as we do, I would not be surprised to see a second edition in late 2011. We all know OSM has already come a long way in just 5 years. Where do you think OSM will be in another 5 years when it's 2015? I think that OSM will be an everyday commodity in 2015. A little bit like Wikipedia is today - you don't need to think if you want to look something up, you go straight to Wikipedia. In 2015, if you say you're using or even involved in OSM, people won't say "oh, that's interesting, tell me something about it" but they'll say, yawning: "who isn't?". And, of course, there will be about 20 books about the topic!

There you have it! We very much appreciated having Frederik Ramm answer a few questions for us. Please remember to visit www.openstreetmap.info to learn more about this publication. Coming soon: Holiday Gift Idea #2 - OpenStreetMap: Be your own Cartographer.