Is 2012 the year of Open mapping? We've been ecstatic to see the energy around OpenStreetMap, and have noticed several applications recently convert to using MapQuest-OSM tiles and other companies like foursquare embrace OpenStreetMap as a foundation of their business. We're going to dive into two of applications that chose MapQuest Open and examine the process they undertook to reach that decision. First, we'd like to talk about changes we've made to our MapQuest-OSM Tiles in order to deliver better, faster and more reliable maps. MapQuest-OSM Tile Changes This week we launched a major upgrade to our tiling infrastructure, with two major benefits. The first is noticeable, while the second hopefully is never noticed. We updated the styles of our Open tiles to match some of the improvements we've made on our licensed tileset. Click on the image below to see the details of our extreme makeover. 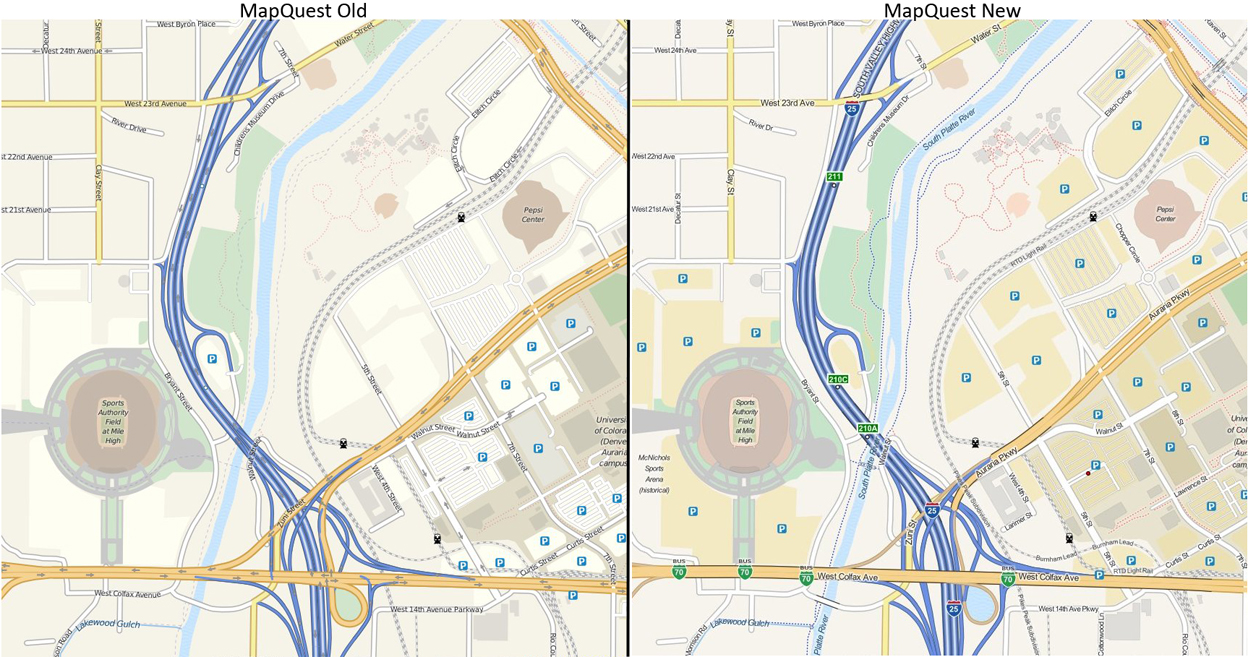 The second change is that we upgraded the tiling platform for better performance and reliability. Hopefully it's like a great offensive line in football - you never notice it because it just works. We have more updates in our Open infrastructure on the way. Stay tuned. MapQuest Open Tiles + Leaflet Next we wanted to highlight some applications that recently switched to MapQuest OpenStreetMap Tiles and why they did it. Both of them paired our tiles with Leaflet, an open source JavaScript mapping library that we're big fans of. Nestoria is a property search engine that operates in five European markets, India, Brazil, and Australia, and has successfully implemented MapQuest-OSM Tiles and Leaflet. There are many reasons why Nestoria chose to use MapQuest-OSM Tiles with Leaflet, but one reason specifically mentioned is the availability of tools and support from the community, which includes MapQuest's active support for OSM. Fubra, the operator of the World Airport Codes website, shared details of their switch from the Google Maps API to a solution that involves MapQuest-OSM Tiles and Leaflet as well. After evaluating a number of solutions, they ultimately decided that the combination of MapQuest-OSM and Leaflet offered the best solution for their needs. If you have questions about MapQuest Open data initiatives or want to learn more, feel free to check out the documentation and open data forums on the MapQuest Developer Network. Also, if you have an app that is using MapQuest-OSM tiles and want it to be featured on this blog, let us know!