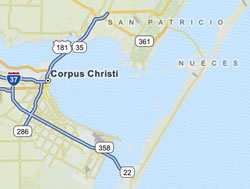 Dual road shields, improved city labeling and coastline trimming[/caption] If you are using MapQuest-OSM tiles in your application — either by accessing the map tiles directly or using the Open JavaScript Maps API, Open Flash Maps API, or Open Static Maps API – you probably noticed quite a few improvements to the look and feel of the tiles over the past few days. The most noticeable improvement is the addition of terrain, but there are quite a few other style-related improvements that we’re excited to announce as well: • Support for dual road shields • Improved road shield spacing • Improved road shield density per zoom level • Improved city styles • Improved tunnel styles • Improved coastline trimming Did you know that MapQuest started offering tiles based on OpenStreetMap data back in 2010? Since then, we’ve expanded our Open data offerings to include a number of APIs – all of which are free to anyone who would like to use them. Unlike our licensed data offerings, MapQuest-OSM tiles are available for direct access and can be consumed by other mapping toolkits, such as Leaflet and OpenLayers. Have questions or need help getting started with using MapQuest-OSM tiles? Feel free to check out the Open Initiatives – Tiles forum on the MapQuest Developer Network or tweet us. We love to hear from developers who are using our tiles and APIs! [caption id="attachment_2314" align="alignnone" width="618"]